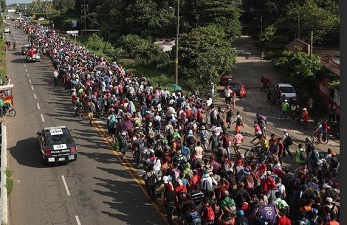 Migrant caravan slowly walks up to the USA

Several days ago, John Kasich, former Catholic and current Governor of Ohio, erroneously said that “The Lord” doesn’t want Americans to defend their borders with a wall or military force. In the meantime, thousands of foreigners from Honduras and parts unknown are walking up to the US border. They intend to cross it and join the millions of foreigners who are living in the USA illegally.

Why do globalists push mass migration?

Now that the West has slaughtered millions of innocent children through abortion, the populations of Western nations like the USA, Canada, and Europe are declining. The globalists think we need mass migration to replace the declining population.

But is there more to mass migration than meets the eye?

As Kitty Werthmann, survivor of Nazi Austria said of her infiltration of a Communist front group in Switzerland:  she talked to a woman there who told her she and her fellow communists were working their way against the U.S. starting in Nicaragua, Honduras, and eventually with an eye to attack the U.S. through Mexico. The woman told her they would do this by getting massive numbers of illegals into the U.S. and pushing the sanctuary movement. Werthmann said when she saw illegal immigrant marches in California carrying the Mexican flag and trampling the American flag, she knew this was actually happening.

In an interview on my radio program “Choose Life” years ago, Mrs. Werthmann asked the Communist she met about how they were going to start the revolution here in the USA. Mrs. W. observed that you needed a lot of soldiers to do that. The Communist replied that the revolutionary soldiers were already here, and that they had come in through the Sanctuary movement sponsored by the churches.

We must pray the rosary for our President and country

Patriotism is a virtue and the President has stated and acted as a patriot by calling on the military to defend our borders. Let us pray the rosary for our country and President Trump that God will save us from Communism and the tyrannies that threaten it.