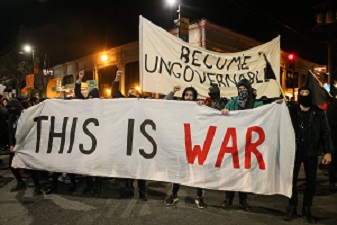 And what you can do about it

Concerned by the recent leftist media uproar over Brett Kavanaugh’s Supreme Court nomination, Senator Rand Paul spoke recently. In an article published on Breitbart, Senator Paul said “I really worry that someone is going to be killed and that those who are ratcheting up the conversation. They have to realize that they bear some responsibility if this elevates to violence,” he added.

So what can we do to stop them?

During World War II, many patriotic Americans and Europeans prayed the rosary for peace. God heard their prayers and ended that terrible war in 1945.

Pray the rosary every day for peace in your heart and in our nation. Pray the rosary at abortion mills where children are cruelly murdered so that these terrible crimes will stop.

Remember, defenseless Austrians drove the Communists out of their nation in 1955 without firing a shot. They prayed the rosary by themselves and in processions. You CAN save your country from a leftist takeover. That’s why you should pray the rosary every day.

Since the enforcement of the tragic  1973 Roe v. Wade Supreme Court decision, our nation has been plunged into a permanent and endless civil war between abortionists and leftists aided by corrupt governments, parents and innocent children. The war now shows signs of expansion.

As you may know, most law enforcement officers and elected officials swear an oath to uphold the United States Constitution, and not Supreme Court decisions.
If they wanted to, legal authorities could merely ignore Roe v. Wade and proceed as usual. But they won’t.

Should be surprised that Leftists are becoming increasingly violent?

Not really. After all, they support the beheading and dismemberment of innocent children inside the womb. Sooner or later, the violence had to spread to people outside the womb. Even pro-lifers are increasingly under attack at abortion mills.

Recently, radio talk show host Michael Savage wrote and published a new book advocating the arrest of leftists who advocate and practice violence. These leftist organizations are now advocating the destruction of the USA.

After all, the Smith Act of 1940 stated that membership in an organization that advocates the overthrow of the US government is a crime. Why aren’t these radicals being prosecuted?

Only President Trump can answer that question. Let us pray the rosary that God will help the President to do his job and for peace in our country.