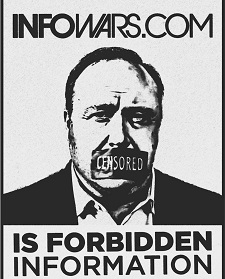 Will pro-lifers be next?

From time to time, Alex Jones, podcaster, writer, and creator of Infowars.com has participated in pro-life activity. He also reports on it.

Alex Jones’ story is a cautionary tale of why we must pray the rosary every day that God will deliver us from the tyrannies that are destroying our freedoms. We cannot allow these attacks on our God-given right to freedom of speech to continue.

Several years ago, I went to a local abortion mill. A French lady living in the USA came with me.

While I was horrified by watching my countrymen saunter in to murder their children, she had a different view. In France, she said, you can’t visit an abortion mill to help parents. You can’t even talk about abortion because complaining about abortion is now a crime in France. In that sense, it was a comfort to her to be able to visit abortion mills to offer help and hope to parents.

That’s why the social media giants’ attack on Alex Jones is important to pro-lifers and writers everywhere. Working together, they have kicked Jones off Facebook, Youtube, Linkedin, Pinterest, and a host of other social media platforms.

Yesterday Jones’ website Infowars.com came under a sustained Denial of Service attack. Jones has stated that he believes he is a test case, and others have been kicked off since then. In his latest statement, Alex Jones has repeated his concerns that having moved to China, Google is now creating Chinese-style censorship in the USA.

The curious thing about this phenomenon is that none of the tech giants will explain why they did so. There is a general accusation that Jones is guilty of “hate speech.” To paraphrase the late Joe Sobran, “hate speech” can be defined as any speech that the Left hates.

Over the years, I’ve watched as alternative health practitioners mysteriously died. It always came out later that they were assassinated.

So I wondered why Jones has not suffered the same fate. Big tech’s public silencing of Jones’ dissent is message to writers and pro-lifers everywhere that speech they hate will not be tolerated.

For its part, the Democratic Party has endorsed the banning of certain opinions and has twisted the concept of free speech. It now says that only the views accepted by the government are free speech.

Where does that leave pro-lifers? In the USA, there is already an anti-free speech “bubble zone” that prevents sidewalk counselors from approaching parents close to the doors of abortion mills. President Clinton enacted “Freedom of Access to Clinic Entrances Act” in 1994, which limits the freedom of speech of pro-life activists.

The FACE act has resulted in bizarre scenes across the USA. E.g. a couple weeks ago, I was at Planned Parenthood talking to mothers. One of the abortionists called the police due to the display of a pro-life banner. Instead of jailing the abortionists, police harass pro-lifers who are trying to talk expectant mothers and fathers out of killing their children.

Is the government making a bubble zone around social media and free speech?

Alex Jones is a courageous man and has stood up for unpopular truths. He also uses bad language, which is unprofessional, and continues to support President Trump when Trump obviously does not support him.

“If Trump doesn’t bust up big tech monopolies, they’ll bust him up.”

In an interview, Paul Craig Roberts said that the  social media giants are in violation of the Sherman Anti-Trust Act. He also said they should be in jail.

We must pray the rosary every day for our country that God will deliver us from the tyrannies that threaten us. These attacks on free speech cannot and must not be allowed to continue.